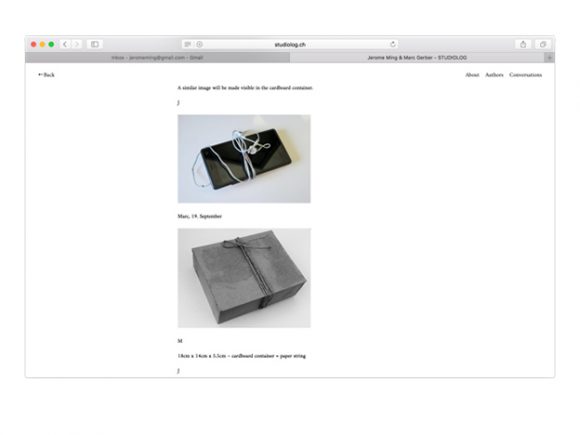 The following text has been modified for context and came together subsequent to my participation in the Studiolog project. The initial purpose was to serve as input leading to a workshop to be held in Lucerne in January 2018.

First it should be noted that I am not an avid user of the internet to host content related to my artistic practice or personal life. For many, I presume it is a vital platform for individual agenda. When I was invited to participate in Studiolog I readily accepted though with some reservation, in part I was ready to challenge my personal resistance to the medium but mostly I was curious to see what could evolve from an anonymous ‘art-based’ exchange.

There were other concerns and limitations that arose in my preparation for and while I was engaged in Studiolog. I have made note of these observations, which I consider inter- connected.

Anonymity – Studiolog allowed the opportunity to be involved in a discussion/exchange with someone I didn’t know personally and had not met previously. Though an informal then formal introduction was made by email by the organizers, it was still not possible to gauge anything about the working partner in detail aside from some samples of their work. The blog was obviously a tool open for dialogue

to be created in whichever way suited the artists, however I still had reservations about the intimacy and sincerity of such communicative platforms. Certainly across international borders it has geographical and immediate advantages.

Control – From the start I realized it was possible to redirect the conversation to personal concerns within an artistic framework, and I engaged in a dialog with myself and not only with Marc Gerber, my working partner. The blog became a sketch-pad to articulate immediate thoughts and ideas, which by nature of the Studiolog concept came with a response which could then add to or redirect my thoughts. This method of exchange gave rise to impose some control over the conversation, as I was unaware of what Marc’s responses would be.

During the exchange, I used the working title ‘Schema’ which describes a pattern of thought and also relates to ‘Schematic’, to link to the subject of my postings that connect to the now invisible area that was once demarcated by walls of the Warsaw ghetto. The first outline of which was established in 1940 and then later modified until it’s destruction in 1943. In a broader sense, the area I chose to work within was my defacto ‘studio’ during the project’s timeframe. The ‘Schema’ idea had been germinating for some time and through Studiolog I found a way to initiate a manifestation of it.

Just to be clear, I did not disclose the underlying working theme – of the Schema – to Marc while participating in the exchange. For the purpose of detailing what motivated my approach in preparation for a workshop I chose to reveal more, as the ‘Schema’ concept was, at the time, very much part of my ‘studio’ work in Warsaw. Studiolog presented the opportunity to further manifest the idea / a conceptual approach to thinking about the existence of something on such a scale that is no longer visible, yet is very much part of our modern history, and the fabric of what is the heart of the city I had lived in for three years and was about to leave. In re-writing this text I am aware I have not given much background to the Warsaw Ghetto, why it was created, and the suffering and the untimely deaths of most of those who were forced into it’s confines. It is of course very important to know about this historical fact. Through my work on Studiolog I was better able to orientate and understand the physical area I was working in during the two weeks, to trace along and within the demarcated area multiple times. It was unimaginable to consider at it’s height the Ghetto ‘housed’ a population estimated at 400,000, and yet nothing of that existence seventy plus years on is visible today.

Trust – Studiolog is accessible as a public platform though the discussion is made to appear private between two people, so simply knowing the conversation was being monitored/accessed externally influenced what I posted. This false sense of privacy made me aware of what I revealed, knowing by doing so I gave consent to private content being put out without any control over it once it was posted. In addition the primary receiver and the public are to believe in what I posted. In the context of Studiolog we trusted whatever was being posted.

Collaboration – To collaborate requires a willingness to be open to input from others, which requires trust in your fellow collaborator/s. Finding a consensus on the objective becomes easier once you start to share similar motivations. In Studiolog it became evident that my working partner, Marc, and I were starting to engage in a discussion in which we, I sensed, understood each other’s motives for our respective postings. My guess is we both started to read between the lines of what the other posted and found ways to manipulate and respond.

An Observation – It is interesting to reflect that from my working ‘studio’ within the area of the former Warsaw Ghetto, now invisible, words like Anonymity, Trust, Control and Collaboration emerged, words I presume that had different meanings in a particular context at the time of the Warsaw Ghetto’s presence. The invisibility of this physical area that once existed has to my way of thinking some parallel with the non physical existence of the blog experience. What I see on the blog is an illusion of that which once existed. It is not tangible, yet from it you are able to read, to look and be affected by what is collectively written and observed as words and images.

The Workshop – The workshop will involve the students to build a narrative based on the initial working concept used in Studiolog by addressing one of the themes inherent in the project -Anonymity, Trust, Control and Collaboration.