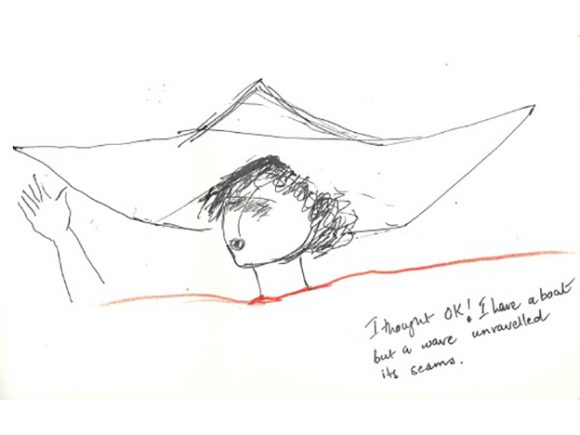 The following texts present a reflection by two artists, Sharon Chin and Varsha Nair who experienced and documented each other’s performances at Beyond Pressure Public Art Festival, Yangon, Myanmar in 2014.

The texts and images were part of an exhibition that presented performance works as seen through the photography of other artists. Titled ‘Two-way Mirror’, the exhibition was curated by Daniela Beltrani and installed at Objectifs – Centre of Photography and Film, Singapore, in 2016.

– a performance by Varsha Nair.

It was dusk on the second day of the festival, and Varsha was the first to perform. Evening falls slowly in Yangon, lilac sky slipping into supple night.

A couple of days earlier, at the hotel, she showed me the giant paper boat she’d made and brought over from Bangkok, where she lives. I knew that the past year or so had been hard on Varsha – there’d been personal loss and poor health, and she’d witnessed violent chaos unfolding in Bangkok. The paper boat seemed symbolic of a transitioning state, of hope made manifest, however fragile.

This was a reunion for us, and mirrored our first meeting in Yangon five years ago. We were both artists in Beyond Pressure. Back then BP was only two years old, and was entirely centered on performance art.

We took photos of each other’s performances then too. I remember being struck by how Varsha created a specific mood in her piece ‘How to grow a perfect Bonsai’ that was mysterious, poetic and sharply comical. I was new to performance art then, and admired artists who seemed to take their time, who could gather a presence and spin it out, like thread – fast or slow, intensely or leisurely, as they wished. I’ve never been able to do that. I’m nervous and shaking and rushed and goofy, never really in my own body during a performance. Even today, I feel a bit of an imposter, with my props and concepts and mental script of how things should happen.

So, back to the more recent past, and Varsha’s paper boat. Things were going well. We had a few days before the festival officially started, and hung out a lot. I could tell she was improvising, slowly putting together the piece in her mind.

The day before both Varsha and I were due to perform, Moe Satt, BP’s founder and organizer, came over to where we chatting together and gave me my agreed artists fees in crisp US dollars. I saw Varsha’s face change. ‘I didn’t know we were getting fees’, she said. Moe Satt was sheepish, but to his credit, looked her in the eye and said some artists were getting fees and some weren’t.

From that moment onwards, I think the festival was ruined for Varsha. She was angry and upset. I didn’t know how angry, until the next day, when she told me she didn’t feel like doing her performance anymore.

It took me a while to truly understand the implication of unfair wages in this context. Festival organizers have always managed their budgets at their own discretion, and in my experience, seldom been transparent about how fees are apportioned. Artists also tend not to ask, to our detriment. This kind of opacity is widespread in the art world, and is tied to the failure to see the work of artists as real labour. Artists internalize this attitude all too easily, and replicate it when we find ourselves in the position of organizer – in other words, a commissioner of artists’ labour.

But it goes further, because artists identify so deeply with their labour. Varsha told me she wasn’t sure why she was there at all. She began to doubt the real reason she had been invited, and to suspect that the organizers didn’t in fact care for her art. Failure to acknowledge its labour value reflected absolutely the same consideration towards its artistic value. I myself speculate on whether the fact that she is an older, female artist had any bearing on what happened.

In the end, Varsha did carry out her performance. She changed it at the last minute, and charged it with her anger and disappointment. I will always remember how she took the paper boat off her head and dashed it to the ground. That is why Varsha is a total pro, an artist I’ve looked up to since the day we met. She took the pain of the moment, and in a lovely pivot, transmuted it into beauty crackling with poise and fury.

Words spoken by Varsha (and translated into Burmese by Maung Day) during her performance:

I thought ok, I have this boat
But a wave unravelled its seams

– a performance by Sharon Chin.

It all looked idyllic. Two seats faced each other under the branch of a tree, two soft pillows resting on the seats, a bottle of honey rigged up and dangling from the branch, and Sharon dressed in a crisp cotton yellow dress that she had made.

She gently invited me to sit opposite her and asked if I would like to scream, to which I replied – yes. Uncertain about how to begin (how does on let rip in the midst of a lot of people encircling and watching you) I followed her and buried my head in the pillow, and let out a mighty scream, then another, and then a few more. She asked: did I feel better, and I said: yes. I hadn’t screamed in a long while.

She handed me a plastic spoon, led me to the honey dangling from the tree, squeezed some out and in unison, we licked the sweet liquid off of our spoons to soothe our throats.

As she looked to see if anyone else would like to join her in sharing their screams and licking honey after, I wondered if from amongst the mostly shy audience if anyone would step forward. And they did, quite a few of them. We all have our dumbed-down screams but not much opportunity to let them out, never mind in public.

Sharon Chin’s performance “Scream, honey” haunts me. It grabs me unexpectedly – whilst reading a book, watching the news, answering a phone call, traveling in another place, or, stepping into a dog turd on my way to somewhere. And, I often find myself thinking – if only Sharon could set up her 2 seats, cushions and bottle of honey, be it in a shopping mall, on a street corner, anywhere really, and in many places around the world……. if only…….