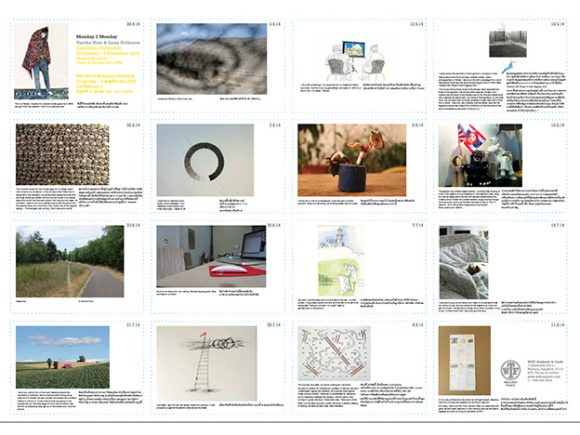 Bangkok in 2014 must be one of the most infertile laboratories of communication.

Any attempt of communication between the polarized sides in the society, which has been so for nearly a decade already, has broken down, and seemingly the first and only successful attempt of the two sides sitting together turned out to be a trick to arrest everybody at the table and by the army taking control of the country. Facebook has been the battleground of the two sides and soon became a place where citizens monitor fellow citizens to inform any suspicious comments/activities to the authority.

Meanwhile, Thailand broke the record of the place from where the most Instagram posts were made on earth (posted from a hi-end shopping mall called Siam Paragon), Thai people became the most Instagram registered citizens of the world, and a Thai woman was named the most Selfie-posting person anywhere, with 12,000 Selfies posted on social media. These phenomena suggest that many in Thailand are watching a small mobile monitor all the time instead of watching each other’s eyes, taking pictures of themselves, posting them online, and satisfied to feel like they are social beings.

That’s why I felt a relief when Lena Eriksson and Varsha Nair showed me their Monday 2 Monday series, a communication project that they have been engaged in since 2011.

One Monday post [February 3, 2014] shows a pinhole camera photo of a street corner near the studio of the other and states, “there is too much darkness in the picture”. “But there is soul, even in the black.”

The week after that the other prints out the same pinhole photo, makes pin holes piercing the paper, framing it and hanging it on the wall. She also goes and looks around at the same place in the photograph and writes, “I’ve been stopping and looking at the corner from where you photographed it, and I see it with a fresh ‘eye’. And even though it is always busy here, the silence from your image – the ‘soul’ of the darkness takes over.”

The following week comes a drawing of a popup open-air cinema on a parking lot. The next one responds to it with a video of making popcorn and writes:

“Here, ever since a man was seen shooting at protestors with a gun hidden in an empty popcorn seed bag, popcorn no longer signifies the innocent pleasure of crunching on it whilst watching a movie. It has become a “factor” – a somewhat dark one.”

Thus the topic goes back to the matter of darkness.

This exchange reminds me of Japanese traditional “Renga” (linked-verse). Renga is a series of poems involving multiple poets that starts with a poem made of a 3-line verse consisting of 5 letters – 7 letters – 5 letters each by the first poet, and the second poet follows it with a 2-line verse consisting of 7 letters – 7 letters. The third poet responds with a 3-line verse again like the first one, then the fourth with 2 lines, and so it continues. There are many varieties of Renga and many continue, as a rule, until reaching 100 verses, and some even till 10,000. It is also an event: the host must decide to hold a session and provides a room, setting up a quiet and inspirational environment before inviting fellow poets. S/he then reads out the first verse to start the process. Established in the mid 14th Century, its rule is rather complicated, not only the regulated number of letters and lines but also the way each verse is linked – for example, the second verse must associate with the first but the third must create an appropriate distance from it, and in this manner throughout the whole session an association as well as a certain distance between each verse’s own world must be appropriately considered. Each verse is written on an origami-like folded paper and the link of topics, words (and the world) of verses that are geographically related on the paper must be considered too. Its like they draw a Mandala with the verses.

The following is the beginning of Renga by the famous “Three Poets at Minase”, Minase sangin hyakuin, by the 15th century Zen monk-poets.

In the river breeze

This continues until 100 verses are formed. The first one is the appropriation of an old verse itself already, and it uses 3 words that suggest an enclosed space that shuts out light (snow, mist, evening), making each of them represent a person’s life in a different state of sadness. It also encourages each of them suggesting that one is not as bad as the other, and to hope that there will be light sometime, only that how soon it will be is different. “The water flows” of the second verse is related to “mountain” in the first verse, which creates a whole picture together and even with an element of smell. The “water flows” also represents slower movement and a longer period which contrasts with water that comes down a slope. The third verse is supposed to kick-start a new imaging, and now we see willows cluster with a breeze showing signs of spring. A willow is said to represent a border and hence the initial part of this set of 100 verses are said to be a mysterious image, which a traveler sees. There is no overall theme but the elaborate set of rules transfer one theme to another as the verse continues.

The key element that sets cultural practitioners, such as poets and artists, and non cultural practitioners apart is that the former is highly conscious of incongruity, a sense of something different, in every moment of life — either she herself or he himself is different or thinks differently, or does things differently from others, or the world she/he sees is different from others, or she/he makes the world different from how others define it. Based on this principle condition, each cultural practitioner chooses a different medium to express incongruity. Communication art literally takes up the way people communicate with each other as a medium to practice art (it has to be distinguished from the term “communication media” and “communication art” that is used widely in a generic manner for design and advertisements). It is particularly significant in today’s social media environment where, in many cases, communication is either taken for granted or abused or exploited.

As a video curator I once organized an all-night video screening of a video letter project between two Japanese artists. I would not hesitate to state that it was a continuation of traditional Renga, albeit using newer technology, in the way the artists used every element of communication: approximation, empathy, interaction, independency, and respect, and challenged them with a determined artistic attitude. Basically what they did, and what the Renga poets have done, is as follows: using empathy as a base to imagine how the other sees and imagines the world – the right approximation helped the process — and interacting with that other world with the production of new imagery. In this way the artists wove an intricate tapestry of various worlds in its imagery and created a stream of consciousness in its narrative. To be independent or to maintain oneself, and respect the other’s independency, imagination and creativity, was necessary for the collaborative project throughout.

Whether today’s artists can make Twitter or Line (with stickers!) a creative impetus and manage to maintain the artistic attitude remains to be seen. For now, Thailand is yet in mist and evening darkness but let us celebrate the fact that somebody in the art world does not take communication for granted, truly. In the case of Lena Eriksson and Varsha Nair’s project Monday 2 Monday, the inter-cultural communication requires extra considerations; and they live in different environments too – one is based in probably the most stable, prosperous and peaceful countries in the world, which, artistically speaking, can be another kind of challenge, whereas the other lives and works in a country of the South which is known for constant political turmoil, which can be inspiring on one hand and on the other hand can be too overwhelming. It will thus be exciting to see how their interaction develops in this open-ended project. Communication art, however, asks for patience and an ability to maintain artistic tensions in both artists and the audience. There’s always Facebook for those who do not wish to engage with this.

The essay was published in the brochure of the exhibition Monday 2 Monday held at WTF Gallery, Bangkok, October 2014