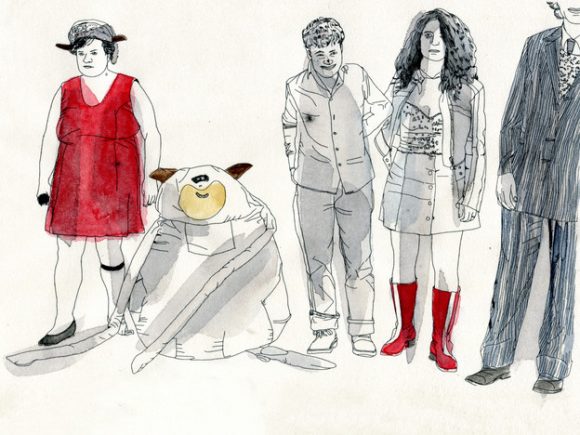 In order to be able to produce optimally artists must be protected with minimal of finances. But it’s not just that. A conversation with Muda Mathis and Sus Zwick, the co-founders of the studio community, «Via».

Samuel Herzog: What must be given materially so that an artist can work optimally?

Sus Zwick: Or corresponding funding in the form of scholarship, production costs, etc.

Muda Mathis: Yes, if the artist develops a corresponding work the art market is also a source of income. But just with video and performance art one can really only make modest money.

Samuel Herzog: Apart from money, what else is important?

Muda Mathis: Well, most of the artists today simply need a computer with Internet connection and a place where they can sit down.

Sus Zwick: The needs are very different. Some feel most comfortable when they can just sit at their kitchen table. Others need a large studio for themselves alone. Thirdly, they need a place where they can exchange with others.

Muda Mathis: Exactly. For some artists it ferments mainly in the head. Others develop their work while they do something with their hands, draw, write, paint, mold. Some, however, also need a group – they need an environment, the presence of peers, to exchange.

Samuel Herzog: The studio community «Via» in Basel is such a place of exchange. You were founding members of Via thirty years ago. Was it about this exchange from the beginning?

Sus Zwick: No, the foundation of Via had quite material reasons. At that time equipment for production of video was so expensive that you could not afford it as a young artist. An editing room cost thousands of francs. So, we got it together.

Samuel Herzog: Today, however, it is different, you can record videos with the mobile phone, edit and send them out into the world.

Muda Mathis: Right. But we realized soon that we could also rent suitable rooms together, for example rooms that have a certain size where one can make studio recordings.

Sus Zwick: And you can get very specific things you would not be able to afford as a single artist simply because you need them so rarely. But if you can share, it makes sense.

Samuel Herzog: What do you mean exactly?

Sus Zwick: That can be various things. In our case, the mixing consoles, professional tripods, screens of all kinds, spotlights, good microphones, props, installation materials, and endless cables.

Samuel Herzog: What is the advantage of so much material comfort?

Sus Zwick: You can simply try out a lot without spending money first.

Muda Mathis: Without such an environment it would be much more difficult to try out ideas materially, visually, and using different media.

Samuel Herzog: But at Via it is not just about the material?

Muda Mathis: Just as important is the transfer of knowledge, the exchange of know-how. Different people have different talents. Some are smart in dealing with computers and are very familiar with certain programs. Others are good at formulating things – submissions or texts for exhibitions, for example.

Sus Zwick: You can also get feedback in the early stage of a project. In the ideal case this can lead to certain processes being shortened. The studio community is the first critical audience.

Samuel Herzog: Does it make you feel less lonely?

Muda Mathis: Yes, yes. But sharing and communicating is not that easy. You have to overcome yourself a bit to show something even if you have practiced it for many years.

Sus Zwick: And it always needs the contrary. You need places of calm and concentration. You have to be able to go somewhere. Sometimes you have to force yourself a bit. Such a studio community is already a beehive, and you can be distracted easily.

Samuel Herzog: What else is needed beyond the studio or the community so that artists can produce optimally?

Muda Mathis: There is also the public interested in artistic activities, which means art needs spaces where you can show an audience what you are doing. Without these windows to the world artistic work makes no sense.

The conversation was conducted by Samuel Herzog. It is part of a series of talks about contemporary art, curated by Sabine Gebhardt Fink, professor at the Lucerne University of applied Sciences and Art.

Muda Mathis was born in 1959, Sus Zwick 1950. Both live in Basel. They work in various formations in the fields of performance, video, installation and music. They are members of the performance band “Les Reines Prochaines” and the production cooperative “VIA AudioVideoKunst” in Basel.

Samuel Herzog is a freelance author in the fields of contemporary art and culinary art. Since 2001 he is Managing Director of HOIO . In collaboration with the Lucerne University of Lucerne, he discusses the topics of art in public space , cooperation , mediation and production conditions for SRF Kultur in a series of talks.