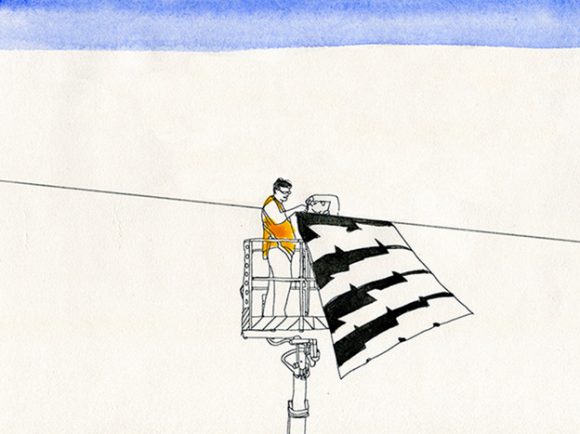 Many artists who show their art in public are seen as socio-political actors. However, considering the use of new media public space is different now. Professor Sabine Gebhardt Fink explains how artists have adapted.

Samuel Herzog: Art claims to be public. And yet there are big differences between a work that is waiting for a buyer in a gallery, a sculpture in the public space, or a performance that perhaps interacts directly with the audience.

Sabine Gebhardt Fink: Let’s focus on art, which has a socio-political claim that it represents in the public space.

Samuel Herzog: This is a relatively new phenomenon that began at the beginning of the 20th century. In the 1950s and 60s we experienced Happenings and Artist Placement Group, which placed artists in different agencies, shops and factories. Since the 90s art has developed completely different facets. Why?

Sabine Gebhardt Fink: In the course of neo-liberalism more and more common goods and public spaces were privatized which were occupied by a few. Artists have been fighting against that since the 1990s.

Samuel Herzog: They do this not only with performances but also by being active in urban spaces. Some are developing economic alternatives, others are making fun of politics – the spectrum seems endless. What are typical examples for you?

Sabine Gebhardt Fink: It occurs to me that the artists who act outside of the art system/market by creating platforms where works are developed, mostly aim at collaborations and where discussions can be held. In Zurich, for example, Esther Eppstein with her message salon or in Basel, Chris Regn with the fictional gallery, Helga Broll.

Samuel Herzog: It is not always as peaceful as in these spaces. Some artists have an aggressive practice in our society.

Sabine Gebhardt Fink: You are thinking of Milo Rau, the Swiss theater director, and his International Institute of Political Murder?

Samuel Herzog: Yes, or Philipp Ruch and his Center for Political Beauty in which he launched political-artistic actions that claim to be PR measures.

Sabine Gebhardt Fink: These are examples that are very much based on the genre of the political satire.

Samuel Herzog: In such actions media space plays a more important role than the real space itself. Is it generally the case that there has been a shift in the way that art appears almost only in virtual form?

Sabine Gebhardt Fink: The media scientist Regine Buschauer speaks of «ubiquitous and pervasive media», which appears everywhere and permeates through spaces and environments of everyday life.

Samuel Herzog: How would you perceive that?

Sabine Gebhardt Fink: In the project Trash Track, for example, the artist equipped electronic waste with mini-transmitters that then followed their shift across America and showed these amazingly long paths.

Samuel Herzog: This example also shows that public spaces of today considering the use of new media, has to be defined differently

Sabine Gebhardt Fink: By all means.

Samuel Herzog: This also means that the audience wants to be addressed differently.

Sabine Gebhardt Fink: Today, an important strategy is certainly the one of confrontation, which at first provokes rejection from the audience – this can happen with or without didactic intent. Many artists only make slight shifts in existing circumstances, provoking things to be questioned or even opening up new perspectives like the artists duo Piera Sutter and Alina Schmuziger.

Samuel Herzog: There is also art that remains invisible. I am thinking about interventions in public space which the public may not even be aware of, or at least not perceive it as art – for example like urban camouflage of Désirée Palmen, in which she makes herself invisible to surveillance cameras. Here the question arises of the importance of public projects to be regarded as art.

Sabine Gebhardt Fink: To me, the perception of it as art does not seem to be central. It is important that there is an effect on the public, changing perceptions, attitudes and actions.

The conversation was conducted by Samuel Herzog. It is part of a series of talks about contemporary art, curated by Sabine Gebhardt Fink, professor at the University of applied Sciences and Art.

Sabine Gebhardt Fink is an author and curator in the field of contemporary art and is a researcher and lecturer at the Lucerne University of Applied Sciences – Design & Art where she is in charge of Master of Fine Arts with Major of Art in Public Spheres.

Samuel Herzog is a freelance author in the fields of contemporary art and culinary art. Since 2001 he is Managing Director of HOIO. In collaboration with the Lucerne University of Lucerne, he discusses the topics of art in public space, cooperation, mediation and production conditions for SRF Kultur in a series of talks.