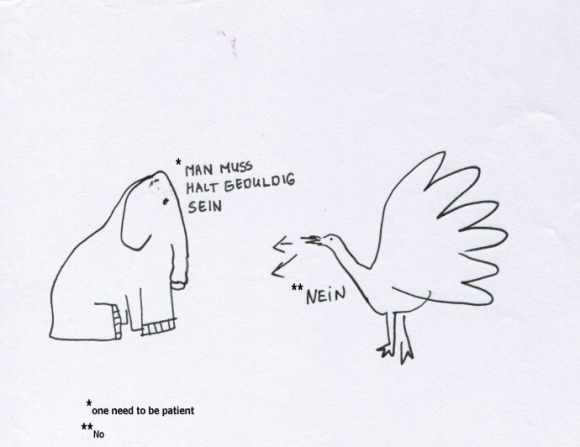 Editorial, published in Issue No. February 2011, in the online journal: Ctrl+P Journal of Contemporary Art

Collaborating is essential to conducting a wide range of life’s activities. Whether for the purpose of subsistence, raising children, performing religious rites, enacting cultural activities or even waging wars, it has always been central to our species’ existence. Comparative to this aeonian historical backdrop, the relatively recent emphasis on ‘collaboration’ within the discourse of contemporary art may seem somewhat redundant. However, the very fact that ‘collaboration’ as an artistic approach is now being explicitly highlighted – through the agendas of governments, councils, arts funders and through the desires of artists themselves – is perhaps a reaction against the increasingly individualistic and alienated society in which we find ourselves.

Ironically, in the contemporary art world it is due to thisvery desire to claim or assign individual authorship, that the act of collaboration is often not fully comprehended or understood by art professionals including artists, gallerists, writers and,at times, even curators.

Although artists collaborate with many different people, for many different reasons and in many different ways, the most successful partnerships or projects have come, not from a self-interested desire to further one’s own career or repertoire, but from a real desire to create a work together. Where putting aside claims to individual authorship, and the willingness to pool skills, expertise, perspectives and knowledge is important, mutual respect and a genuine personal connection is imperative.

Engaging in artistic collaboration promises the potential to create a work that is more than the sum of its parts, allowing possibilities beyond the scope of individual participants to be realised. Implicit to successful collaborations, then, is the necessity for all parties to share, contribute, communicate, trust and, most importantly, to relinquish ultimate control and ownership over the creative process; and, herein lies the challenging nature of collaborations.

Throughout the texts offered in this issue of Ctrl+P common themes continuously surface. Eva Kietzmann and Sonya Schönberger’s Frequently Thought Questions (FTQ) presents an interior monologue where uncertainties and insecurities that often attend working collaboratively are voiced. Raising key points related to the start of any kind of relationship, they ask, “Are you open minded? Are you flexible? …Can you change? Am I in or out? Do you want to be involved?” and later, more explicitly, “Do you trust me?”. Thus it appears that establishing trust is inextricably linked and dependent on the understanding that participants share certain approaches or attitudes to the process.

These issues are elaborated upon in Tricia Flanagan’s The ethics of collaboration in sunaptic sculpture, where she writes of the necessity of shared ideologies and genuine person to person relationships in collaborative projects, pointing out that trust is an essential component to be won through long-term commitment. The importance of these aspects in meaningful collaboration is further reinforced in a number of the texts. In Squaring Off: 7.9 Cubic Metres, a project initiated by artist James Carrigan who collaborated with Eliza Tan as the project’s curator, Carrigan refers to the project as ‘primarily a series of relationships…’ and Tan points out that he had talked about the project as ‘a means of locating …[his]…own practice within a network of social relations.’ In Damien March’s On Collaboration he highlights the intimate, multi-layered connection of the ‘artist couple’, and in Judy Freya Sibayan’s text HerMes  she places great value on the kind of spiritual or ‘pre-destined’ connection she experiences with her collaborators.

Furthermore, the artist duo Sus Zwick and Muda Mathis appear to take strength from the fact that they have developed together as friends and as artists over a long period of time and as a result now have an ‘intuitive understanding’ of one another. Also working regularly with a women’s band, they talk of the empowerment that being part of a group enables; as Sus Zwick puts it, “From all this work and our cooperative projects, relationships and friendships are forged and endure long after the work is finished.

Mrat Lunn Htwann’s collaboration with Moe Way and Zeyar Lynn also underscores the primacy of trust. Being in different geographical locations the work came about after a phone conversation where each artist decided to spend an hour to ‘collaborate’ in their individual spaces, following the conversation. To work in this way suggests close friendship in which each person’s commitment to input individually whilst also keeping the group in mind, must be trusted.  Simon Cooper and Siying Zhou worked in a similar way, producing their contribution at different sites and then merging them together in the final work.  Lena Eriksson and Chris Regn, on the other hand, produced their drawings whilst sitting together, in the same location, in conversation.  Interestingly, the drawings address issues such as friendship, patience and the ego, bringing into play aspects of negotiations particularly relevant when working in partnership or collectively. While in Andrew Burrell’s account of his and Trish Adams’ project mellifera, he does not emphasise the importance of their personal relationship but highlights their shared conceptual concerns, and in doing so offers a pertinent example of the dynamism of artists from different fields of enquiry coming together to investigate a shared interest.

In contrast to collaborations borne from a more personal history, community-based collaborations such as Frame Works’ project ‘Zariyein’ and the community-based projects led by Wu Mali focus not so much on shared ideologies and personal relationships but more on being catalysts and initiating a process within communities, and, as Frame Works stresses – on being careful not to ‘predetermine meanings so as to ensure that a multi-layered understanding of the context could emerge’. Frame Works writes of the success of the project when they observed their role as artists diminish as the community took up and became key in instrumentalising the project’s activities. In this way ‘Zariyen’ also raised questions of authorship and representation.

Likewise, the artist collective Videoklub challenges the notion of individual authorship by transferring authorship of the individual video works produced by its members to the local collective, of which specific names are unknown. In the announcement presented here, Axel Töpfer of Videoklub, Leipzig, invites our readers to set up similar Videoklubs in their own environments and become part of the network. The Videoklub is devoted to expressions of individual aesthetics but in the form of group authorship.

Finally, Andrew Burrell draws our attention to yet another aspect of collaboration in terms of establishing or utilising networks when he writes of “a whole other level of collaboration that has taken place in this project…[one which]… is often overlooked by those who are not practitioners when they write about practice, though it is most highly prized by practitioners themselves – that is the online-networked community.”

Indeed, without this very community and connections-on-line or the direct face-to-face kind-a number of the projects mentioned in this issue and even the issue itself would not have been possible.

Thus, artists may collaborate with community groups, with scientists, with friends, with lovers, with each other; collaborations can last a lifetime or endure only for a short period. Where some community projects may seek to draw our focus to diverse social issues, both the obvious and the less obvious ones, empower disadvantaged and disenfranchised peoples, or renew interest in local cultural traditions and crafts, other collective projects aim to challenge accepted modes of artistic production, notions of authorship and of representation. Ctrl+P: Collaborations brings together a collection of texts and on-page collaborative works which investigate these issues and present just some of the countless ways collaborations are made manifest.

Olston and Nair have collaborated to bring this issue number 16 of Ctrl+P together. Download the issue at:

Ctrl+P Journal of Contemporary Art was founded in 2006 by Judy Freya Sibayan and Fluadette May V. Datuin as a response to the dearth of art publications in the Philippines. It is produced in Manila and published on the Web with zero funding. Contributors write gratis for Ctrl+P. It is circulated as a PDF via the Net.
Ctrl+P provides a testing ground for a whole new culture and praxis of publishing that addresses very specifically the difficulties of publishing art writing and criticism in the Philippines. It took part in the Documenta 12 Magazines project, a journal of 97 journals from all over the world